This annotation was written in reference to my paper “Re-imagining Chang-rae Lee’s Native Speaker through the National Politics of Global Capitalism.” See my abstract here. 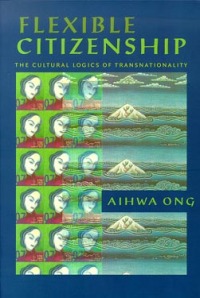 In the “Introduction” of her book, Ong demonstrates a broad concern with the notion of transnationality, defining it as “the condition of cultural interconnectedness and mobility across space—which has been intensified under late capitalism” (4). She strongly questions the assertions of some contemporary scholars that globalization has precipitated the erasure of national borders and the consequent emergence of liberating cosmopolitan identities. Ong argues that states are effectively policing their national borders and identities by developing systems of governmentality to regulate transnational flows of culture, capital and peoples. She relies on Foucault’s definition of governmentality as referring to “techniques and codes for directing human behavior” (6). Ong ultimately presents a complex theoretical framework that attempts to analyze cultural productions within the context of global capitalism (Marx) and governmentality (Foucault).

She accentuates the necessity to examine how changing factors of our current global political economy has led to the creation of mobile and nonmobile subjects—those who are able to maneuver and profit from the system and those who become localized to a particular place because they lack the economic means to respond to the flows of global capital. There are also of course “mobile” subjects who are forced to engage in compulsory labor migrations. I assert that these “mobile” subjects can be compelled by other means as well, for example, the internalized need to fulfill certain social expectations and national narratives such as the function of the model minority stereotype in Chang-rae Lee’s Native Speaker. But Ong does ultimately express a hint of optimism towards the notion of flexibility. She asserts that while states have developed flexible means of regulating transnational flows, individuals have also developed a kind of “flexible citizenship” that can be liberating, finding markets and homes in multiple locales.