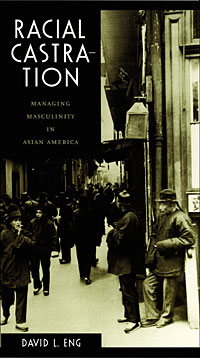 In his “Introduction,” Eng asserts that his book will explore how gender and sexuality influences the racialization of Asian American men, who are often conceived and represented as emasculated figures in the American popular imagination and culture. Eng explains that his title is drawn from Freud’s concept of “fetishism,” or “a psychic process whereby the man attempts to obviate the trauma of sexual difference by seeing at the site of a female body a penis that is not there to see” (2). Substituting the female “other” with the Asian American male, Eng calls attention to the refusal to recognize the Asian American penis that is actually there, leading to what he terms as an act of “racial castration” (2). Eng offers the relationship between Gallimard and Song in David Henry Hwang’s play M. Butterfly as an example to substantiate his theoretical framework. Eng further notes that rather than being fetishistic and singular, this feminized conception of Asian American men has been problematically “normalized” (3).

Eng ultimately attempts to address through his book the oversight in psychoanalytic criticism, where scholars have traditionally ignored the intersection between race and sexuality. While psychoanalysis has been helpfully deployed in feminist and queer studies, Eng challenges its theoretical limitations by proposing new discursive parameters for psychoanalysis as a critical tool in race and more specifically Asian American studies. He stresses the pertinence of this connection by calling attention to how race has always been an important feature of Freud’s work. Eng cites, for example, the representation of the “primitive” in Totem and Taboo, who was distinguished and an “other” to the civilized European society because of his inferior sexual development as well as his “dark origins” which also connotes a “visual darkness” (8). Eng also discusses “On Narcissism: An Introduction” where Freud suggests that individuals are driven to repress their homosexual urges and assimilate to the dominant heteronormative society in order to claim legitimate membership in the family, class, or nation. Freud asserts that “modern, ‘civilized’ European political formations like family class and nation can be understood, in part on the basis of study of colonized subjects figured as pre-modern ‘primitives’” (12). Eng emphasizes that in this framework, colonized societies are posited as homosexual while heterosexuality is implicitly tied with whiteness.

In his book, Eng attempts to essentially address the gap in Asian American studies, where focus on “female subjectivity and gender” has led to an overlooking of “Asian American male subjectivity, and in particular, homosexuality” (15). He cites Immigrant Acts in which Lisa Lowe argues that specific juridical measures have worked to gender Asian American males. Eng notes, for example, how Asian American immigrant males have traditionally worked in professions stereotypically conceived as “feminine” such as “laundries, restaurants, [and] tailor’s shops,” demonstrating how economic class systems further contribute to the gendering of this group (17). Eng also mentions the “antimiscegnation and exclusion laws” that prohibited the immigration of Asian American women, leading to the creation of “Chinatowns as exclusive ‘bachelor communities’” (17). He suggests that these are ultimately “‘queer’ spaces institutionally barred from normative (hetero)sexual reproduction, nuclear family formations, and entitlements to community” (18). Eng therefore asserts that discussion of “‘deviant’ sexuality” is not just important to those individuals who openly identify as “queer, gay, or lesbian” because historical processes and political juridical measures have rendered a much greater part of the Asian American population “queer,” marginalized and excluded from full American citizenship status (18).

Finally, Eng concludes that another prominent focus of his book is the psychological ramifications for those Asian American males who attempt to assimilate to the dominant heternormative, masculinist, white racist society. He suggests that this requires the development of complex physic formations where the Asian American male must “simultaneously recognize and not recognize the material contradictions of institutionalized racism that claim his inclusion even as he is systematically excluded” (22). Eng is therefore interested in not only how the dominant white hegemonic society but also how Asian American men themselves are invested and implicated in furthering the stereotype of emasculation.

This annotation is written in reference to my paper, titled: “David Hwang’s Metamorphosis of Madama Butterfly: Critiquing Orientalist Fancy and Building Bridges Towards Cultural Understanding.”

In this article Morris discusses how M. Butterfly merely reestablishes the hierarchal “gender system” inherent in Orientalist philosophy. She claims that while the figure of the “transvestite” seems to offer a means of overturning gender stereotypes through its fundamental ambiguity and fluidity, it is nevertheless “contained by heterosexual opposition between male and female” (49). The transvestite (man-as-woman) becomes a representation of the “emasculated rather than liberated male” (49). Therefore, at the end of the play when Song undresses he reasserts his masculinity, whereas Gallimard in donning Butterfly’s kimono is emasculated. This reversal rather than collapsing gender hierarchies in M. Butterfly speaks to the play’s failure as a deconstruction of Puccini’s opera.