This annotation was written in reference to my paper: “The Productive, Political Power of Love in Nina Revoyr’s Southland.” 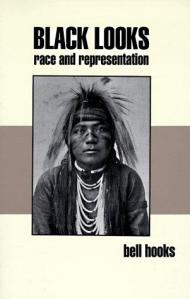 In this article hooks relates her experience at a meeting with several black feminist women. She reveals that her attempt to share her personal narrative of growing up in a “segregated rural black community that was very supportive,” where she was able to develop a confident self image and have a “positive experience of ‘blackness’,” was sharply rejected by the other women who believed their own stories of pain and cruel victimization were more authentically “black” (44). hooks essentially describes a situation where blacks are themselves complicit in trying to contain difference into recognizable stereotypes. They want to perpetuate the image of the suffering, oppressed black woman because that is what society expects and more readily accepts. hooks emphasizes, however, the need to break down this monolithic essentializing narrative to make room for stories of diverse black female experiences. Rather than clinging onto this popular conception of the victimized, oppressed black woman, hooks calls for an acknowledgement of those women who do love and take tremendous pride in their blackness. She asserts that there will only be true progress when black women stop trying to silence those whose experiences are different from their own and start embracing the tremendous diversity within their own community.

Ultimately, hooks suggests that narratives that explore black self-hatred, where blackness is presented as ugly and undesirable, must be replaced or, at the very least, taught alongside positive narratives of black power and pride, because if students are never shown that blackness is something that can and should be loved, how can they begin to love themselves and one another? hooks emphasizes that this act of loving can serve as a real form of political resistance because it directly challenges the logic of white supremacist thought, which cast blackness as that which should not and cannot be loved. In the following paper I argue that Nina Revoyr’s 2003 novel, Southland, takes on and even expands this political project as a narrative that teaches readers how to love blackness, Asian-ness and most importantly demonstrates that love is possible between members of these two minority groups that have been often depicted as highly antagonistic and antithetical to one another.