This is an annotation for a paper I am currently writing on Martha Meredith Read’s Margaretta. See my prospectus here. 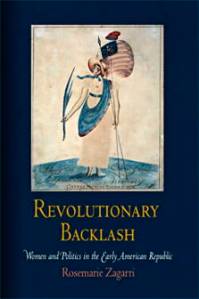 In her “Introduction” to Revolutionary Backlash Zagarri discusses how the American Revolution transformed popular opinion about the role of women in politics and “initiated a widespread, ongoing debate over the meaning of women’s rights” (2). While females were unable to participate legally by “voting and holding public office,” she reveals that they nevertheless helped shaped the character of the young nation through informal channels, whether by organizing themselves or influencing their husbands and sons (2). Ultimately, the contributions females made during the Revolution appeared to herald a similar revolution for women in terms of political status and rights, a development often neglected by historians and scholars. Zagarri demonstrates how the formulation of “republican wife” or “republican mother” creates a space for women in the political life of the young republic, albeit one that remains consistent with the “gender status quo” (5). Those women who attempted to step beyond the confines of domesticity to actively pursue politics were denounced as “female politicians” and seen as a threat to the moral and social order of the new nation (5). Therefore, while the American Revolution did open up new possibilities for women and even brought debates about women’s rights into the public arena, the backlash was quick to come. New discourses emerged encouraging women to return to hearth and home, and serving the nation from within the domestic realm was once again seen as their most productive and practical use. Zagarri’s Revolutionary Backlash attempts to shed light on this period in history, to examine the “rapid shift in perceptions, and self perceptions, of women’s political role” (9). In my discussion of Martha Meredith Read’s Margaretta I hope to examine how the epistolary novel, though published in 1807, continues to explore the themes of women’s rights and reinforces the prominent role women played in shaping American national identity.